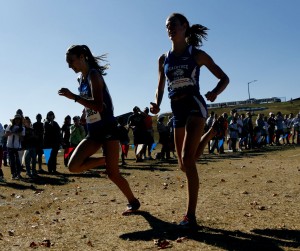 CARROLLTON — Coming into Friday’s state cross country meet, the Brookwood and Wesleyan girls knew they had the talent for a podium finish. But when the final results were announced, it didn’t change the elation both teams had when they found out they each took home second place as a team in each of their divisions.

Brookwood (128 points), paced by Elizabeth Saliba’s fifth-place finish, finished second in the Class AAAAAAA race behind South Forsyth, which placed three in the top 10 to claim the title with 74 points.

“They ran great,” said Brookwood coach Chris Carter. “They were really relaxed all week. We tried to keep everything as normal as possible even with the meet on Friday. They’ve been running well all year, so why would we change anything?”

When describing Saliba, who finished with a time of 19 minutes, 41.48 seconds, Carter said he wishes he could take more credit for her success.

“You want to talk about a calm kid,” he said. “I’m not going to change what she’s been doing. She’s been working her butt off. She was a 24-minute kid two years ago.”

For Carter, getting the Broncos back on the podium is a huge deal.

“Two years ago, we finished 14th and it was kind of a low point as a group,” Carter said. “We talked about that tradition and how we can’t let that go. We talked about the importance of running for each other and they’ve brought us back (here). Two years ago, I thought the tradition was in trouble, but these upperclassmen brought something back that will last for many years to come.”

Individually, Peachtree Ridge’s Mary Kathryn Knott was the leading Gwinnett runner, finishing in third with a time of 19:17.32.

Wesleyan had a 19-second split from runners 1-5, edging out region and county rival Hebron Christian, 133-139, for second place.

“The pack was impressive to have our first through fifth runners eight places apart really says something about how hard those girls worked and their ability to fulfill a strategy that was put into place,” said Wesleyan coach Chad McDaniel. “I have to thank our coaches because they do unbelievable things with our kids. We didn’t know where it would shake out. We felt like if we ran out of our minds, we could finish second, but we knew it would be a long shot.”

Hebron also had a strong race with Miranda Taylor (21:03.11) leading the way in 11th, but after Wesleyan’s pack swallowed up their next runners as the Wolves had three runners in before two of Hebron’s, and five runners in before four for the Lions.